Eigen-ji was established in 1361 under the order of Sasaki Ujiyori, lord of the Omi domain, for Zen master Jakushitsu Genko. Due to Jakushitsu’s fame as an eminent Zen master, more than 2000 monks came to train at the temple. This was a period when many temple buildings were constructed under the patronage of the Imperial Court and the shogun of the Muromachi Period (1336-1573) and it is said that at this time a total of 56 halls of worship were constructed in the Eigen-ji Temple grounds. 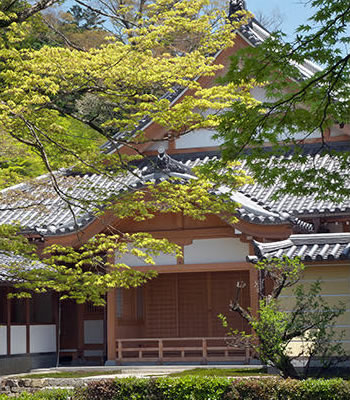 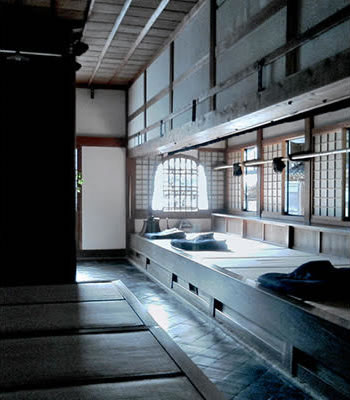 However, this was a time of great upheaval. At the outbreak of the Onin War (1467-1477) Eigen-ji found itself embroiled in power struggles between feudal lords involved in the conflict. In 1492 and again in 1563, the temple was completely destroyed by fire. In the years that followed, what remained of Eigen-ji fell into disrepair.

In 1631, Beppo Join—a Zen master from Myoshin-ji Temple in Kyoto—lamented the poor state of Eigen-ji and made a vow to restore the temple. He knew people of influence and means and petitioned them by letter to help with the restoration. Beppo Join worked on site, transporting rocks and earth to the temple grounds to prepare the site. In 1643, an imperial edict issued by Emperor Go-Mizunoo commanded that Isshi Bunshu, who oversaw the scholastic training of the emperor, take the position of abbot at Eigen-ji Temple.

The Empress Tofukumonin (formerly styled as Tokugawa Masako) ordered the Ii clan of the Hikone domain to restore the temple’s former glory, and with the help and support of the Ii clan many temple buildings were reconstructed and Eigen-ji became once again a place where people could learn about the teachings of the Buddha. 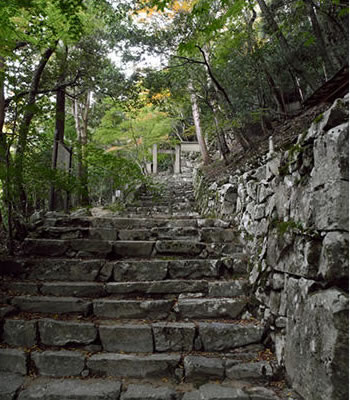 The Yotsugi Kannon, the principal image at Eigen-ji, is a hibutsu—a Buddhist statue that is normally hidden from public view. Usually the doors in front of the statue are closed, but once every 25 years or so, the temple holds a special ceremony and the doors are opened so that worshippers can see the hibutsu. The last occasion for viewing was in 2016.

It is said that, soon after he began his tenure as abbot at Eigen-ji, every night Jakushitsu would see a glittering light in the mountains to the east of the temple. Eventually he took a walk out there, where he discovered a small statue of the bodhisattva Kanzeon, about five centimeters high, on top of a large rock. Jakushitsu asked noted Buddhist sculptor Gotokan to come to Eigen-ji from China and create a seated clay Kanzeon statue, and he secreted the smaller statue inside the crown of Gotokan’s creation. Thus this small statue became the principal image of Eigen-ji Temple. 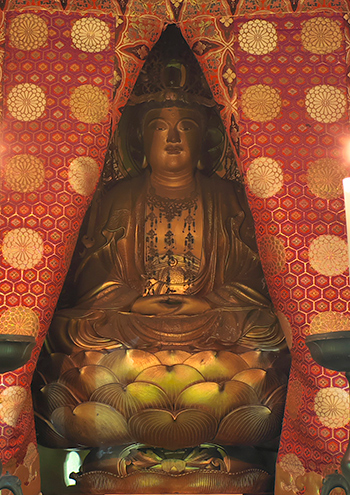 Mitsutaka, the son of Sasaki Ujiyori, could not produce an heir. Mitsutaka came to pray at the Kanzeon statue every day, and on the 21st night his wife had a revelation in a dream whereby a beautiful lady—an avatar of Kanzeon—announced that “your innocent prayers and pure spirit will bring you a child” and in time Mitsutaka was blessed with a son and heir (yotsugi in Japanese). This story spread far and wide, and the temple statue became known as Yotsugi Kannon, bringer of children, heirs and successors.

Even to this day, many people still come to visit Eigen-ji Temple with the intention of praying for a child, or come to give thanks following the birth of a child.

Jakushitsu Genko was born on May 15, 1290 in present-day Okayama Prefecture. It is said that his father could trace his lineage back to the distinguished Fujiwara clan.

At the age of 13, he decided to dedicate himself to Zen practice and began training at Tofuku-ji Temple in Kyoto. Two years later at the age of 15 he took his vows to become a priest.

When he was 16, he became a disciple under Zen master Yakuo Tokken in Kamakura.

As a young man he had a real aptitude for Zen teachings and that, coupled with his fierce determination to learn, he achieved satori enlightenment at the tender age of 18.

Aged 31 he went to China to study, learning from Zen masters in temples across the country. Of this number, the teachings in solitude of Zhongfeng Mingben, the Zen master at Tianmu Shan near Hangzhou, were deeply influential. Zhongfeng was the priest that gave him the name Jakushitsu.

He returned to Japan aged 37 and avoided anything to do with state-sponsored temples and Zen masters who wielded power and influence, instead choosing to wander in solitude across the country, eventually continuing his Zen training living as a hermit in a small hut in the mountains.

Living this solitary existence proved to be fertile for the imagination, as Jakushitsu wrote his best poetry during this time. His simple yet beautiful poems were collected in the Jakushitsu-roku, an anthology published after his death. His poetry bore a significant influence on Gozan Bungaku—the literature of the Five Mountains—poems produced by the principal Zen monastic centers in Kyoto and Kamakura.

At the age of 71, he was asked to serve as the founder of Eigen-ji Temple by Sasaki Ujiyori, lord of the Omi domain. As his fame grew, Jakushitsu was asked by both the Imperial Court and the Shogunate to become abbot of Tenryu-ji and Kencho-ji temples—both of which were state-sponsored temples—but he declined on both occasions.

Jakushitsu passed away on September 1, 1367. His will stated: “After I die, the buildings and land of Eigen-ji should be returned to the domain lord. Everyone should leave the site and go and live a quiet, solitary life in the mountains in accordance with Buddha’s teachings. However, if that does not happen, I will permit that Eigen-ji remain and be used as a place of Zen training.”

The Emperor of the day bestowed upon him the posthumous name of Enno Zenji in 1368 and Emperor Hirohito bestowed the posthumous name Shoto Kokushi in 1928 as a mark of respect for his moral virtues in life. His writings have been designated as an Important Cultural Asset

Guide to the Temple Precincts

Tando Bridge is the large bridge with red railings that crosses the Echigawa River directly in front of the entrance to the temple.

Rebuilt in 1919, Daiketsu Bridge spans the Bantokei—a small valley which runs behind the temple and feeds into the Echigawa River.

This stone image is dedicated to the memory of a priest that passed away following a traffic accident. The image is of a trainee monk in full formal dress.

Consisting of 120 stone steps, the rock face at the top of the steps holds stone images of the Shakyamuni triad—Gautama Buddha flanked by Monju and Fugen Bodhisattvas as well as sixteen arhats.

This mausoleum holds the earthly remains of Lord Ii Naooki, the fourth-generation head of the Ii Clan of the Hikone domain, along with seven of his wives. Naooki studied under Nanrei Ejun, the 86th generation abbot at Eigen-ji Temple, and in accordance with Naooki’s last will and testament, his remains were interred at Eigen-ji.
*The Mausoleum is not open to the public.

Outer Gate and Senjisui (Water basin for washing the ears)

Rebuilt in 1746, the Outer Gate serves as the entrance to the temple.
The water basin next to the gate is shaped like an ear. A place for ritual cleansing of hands and mouth with water when visiting a temple, the ear shape is a reminder of Buddhist thought: “Upon entering the Buddhist priesthood, one must wash one’s ears (spirit) in order to properly discard all the worldly values and desires that you have taken in through your always-open ears since you were born”.

The Clear Flowing Water of the Echigawa River

The Echigawa River flows from the Suzuka Mountains to Lake Biwa. Once known as a river that often overflowed its banks, its nickname was Raikei, or Thunder Gorge, but after Jakushitsu assumed the role of abbot at Eigen-ji the river began to flow calmly with clear water and its nickname changed to Otonashigawa, or Silent River.

The imposing Main Gate was completed in 1802. The upper floor of the gate is dedicated to the worship of the Shakyamuni triad—Gautama Buddha flanked by Monju and Fugen Bodhisattvas as well as sixteen arhats.

The Bell Tower was rebuilt in 1772. The original bell was melted down for war munitions during World War II. A new bell was cast in 1950.

The Main Hall is where the principal image at Eigen-ji, the Yotsugi Kannon, is housed. The thatched roof is made from yoshi reed harvested from the shores of Lake Biwa. The current structure dates from 1765 and was constructed with the support of the Ii Clan. The temple’s mountain name—Zuisekizan—displayed on the front of the Main Hall is a carved reproduction of calligraphy by Jakushitsu.

The Buddha Hall is where traditional services and rites are held. The current structure dates from 1728. Upon entering the hall one is faced by is a Buddhist triad donated by Emperor Go-Mizunoo consisting of Gautama Buddha and two disciples, Kashyapa and Ananda.

Trainee monks spend most of their time in this building—during the day for zazen practice and chanting sutras, and at night for sleeping. The current structure was rebuilt in 1933. Prior to the rebuild, the Buddha Hall was used as Hall for Zazen Meditation.

The Chinjusha—a shrine on Buddhist temple grounds dedicated to the tutelary deity of the area—was constructed in accordance with the last will and testament of feudal lord Sasaki Ujiyori. Nyakuichioji, the protective deity of Buddhism, is enshrined here.

The Founder Hall contains the earthly remains of Jakushitsu Genko. The current structure features sections of a noh stage built for the Ii Clan and moved to this location.

The kaede maple is said to have been planted by the temple founder Jakushitsu Genko. The current kaede is the third-generation tree and was grown as a seedling from the previous generation.

This sutra repository features a tenrinzo, a set of rotating shelves for sutras, and was last rebuilt in 1676. The repository holds a set of the Tripitaka, the complete Buddhist canon, purchased from Ming Dynasty China.

Restored in 1647, the Ganku-in Chief Priest’s Quarters was long used as a residence for the chief priest. As the years passed it fell into disrepair and a new building was constructed in 2016.

Remodeled in 1935, the Hyogetsu-tei Guest Room is a reception area for guests and dignitaries who have come to attend services at the temple.

A learning facility for trainee priests. Reconstructed in 2015.

The rock upon which the principal image at Eigen-ji, the Yotsugi Kannon, is said to have first appeared.

It is said that at the time of Jakushitsu a white deer appeared and frolicked about on this slope.

This is a natural cave formation that has been blocked up with rocks for safety. A cool wind blows from the cavemouth.

This small mound is a place for collecting old chasen bamboo tea whisks that are no longer fit for use. Each year in May tea masters bring their old chasen whisks to Chasenzuka to express their gratitude. A Buddhist service is held to express wishes for their advancement in the Way of Tea.